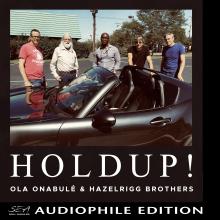 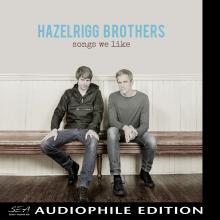 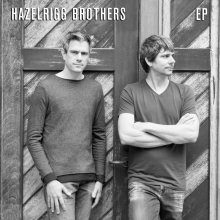 There’s nothing quite like the arresting clarity of tone, interpretive subtlety and forward-looking musical simpatico of the Hazelrigg Brothers, who’ve worked in an acoustic trio format for roughly 20 years. But the instrumental gifts of pianist George and bassist Geoff (pronounced “Joff”) Hazelrigg tell just part of story.

Based in Doylestown, Pennsylvania, the Hazelriggs pursued formal jazz studies but ultimately chose their own route. They’ve developed a unique harmonic outlook inspired, as much as anything, by their backgrounds in early music: George took up harpsichord (not piano) at age 3 and today is a sought-after harpsichord technician for major concert halls. Geoff plays viola da gamba. They’ve been known to play Renaissance music together in their spare time. “The traditions we relate to are hundreds of years older than what everybody thinks of as traditional now,” George quips. “And we came up playing rock and pop as well.”

The brothers are also proprietors of Hazelrigg Industries, which manufactures and markets high-end audio gear for the D.W. Fearn company. They record in their home studio and do production and session work for artists in the rock and pop world, including Shy Girls (a.k.a. Dan Vidmar) and Autre Ne Veut (a.k.a. Arthur Ashin). They are also both glider pilots. It’s an unusual and eclectic range of life experiences, no doubt responsible in some way for the Hazelriggs’ refreshingly plainspoken and modern trio sensibility.

Songs We Like, with drummer John O’Reilly, Jr., is the first official Hazelrigg Brothers trio release. The album ties together George and Geoff’s multifaceted tastes and abilities in a way that’s exquisitely attuned, dynamically sensitive and sonically transparent. These are trio readings of ’70s/’80s pop treasures (and pieces by Béla Bartók and J.C.F. Fischer), intended not as fodder for roundabout jazz excursions, but rather as windows into the songs’ essence. “Catch a Star” by Men at Work, “Spirits in the Material World” by The Police, widely varied and well-loved material by Jethro Tull, Jimi Hendrix, Led Zeppelin, Steely Dan: the repertoire comes from a personal place, often inspired by the songs’ lyrics, and it fosters an approach that’s unmistakably honest and direct. “We’re not trying to play ‘jazz’ and pull these songs in,” says Geoff. “We want to play these songs.”

The Hazelrigg home studio is as compact as it gets, and that’s how the music is captured: intimately with no amplification or headphones, the trio members closer together than they would be on a live stage. With the keen ears that come from their work in the audio business, the brothers “strive for tone,” as the old jazz saying goes. George can play the Steinway B at pianissimo volume and still summon a great deal of intensity. O’Reilly, son of the preeminent school symphonic band composer John O’Reilly, has worked with the Hazelriggs at home and live for over two years and internalized their aesthetic to a remarkable degree. With consummate taste and control, he maintains the trio’s delicate sonic balance while still powering the music ahead.

The Hazelriggs were born and raised in Princeton, NJ. In addition to the instruments they took up, they credit their singing in Princeton’s Trinity Choir, directed by the world-renowned John Bertalot, as central to their musical education. From age 8 to 15 George studied organ and harpsichord at Westminster Choir College under Mark Brombaugh and Gavin Black; at 16 he studied jazz piano with Grammy-nominated composer Laurie Altman. He also attended New York’s Center for Media Arts and later Manhattan School of Music, where he studied under Garry Dial. Geoff studied bass with Reggie Washington (then of Steve Coleman and Five Elements) and went on to graduate from Philadelphia’s University of the Arts, studying under bassist Gerald Veasley and pianist/composer Edward Simon.

After a period working with rock bands in New Jersey and Philly, the brothers moved to Washington, D.C. They spent years touring and producing: George with Maysa, Kim Waters and the Grainger Brothers as well as vocalist Slim Man; Geoff with Atlantic recording artist Tony C. and the Truth. Geoff also has the distinction of opening Bryan Ferry’s “As Time Goes By” tour on three hours’ notice when Ferry’s bass player got stuck in England.

The brothers produced and played on two albums for Baltimore trumpeter Jimmy Wilson and subsequently worked with Dennis Chambers, Chester Thompson and Gary Thomas. They also did production work for the Polish pop artists Beata Kozidrak and Irena Jarocka. For several years they recorded electro-acoustic music under the name Collective Acoustics (one track was featured at length in a Freakonomics podcast). Plans are afoot for a series of album-themed efforts to follow in the mold of Songs We Like, so stay tuned for more inspired and inventive trio music from the Hazelrigg Brothers.